‘Track your ballot like a package’: How technology will smooth the way for November’s mail-in ballot surge - BallotTrax
3545
post-template-default,single,single-post,postid-3545,single-format-standard,tribe-no-js,ajax_fade,page_not_loaded,,vertical_menu_enabled,vss_responsive_adv,vss_width_768,qode-child-theme-ver-1.0.0,qode-theme-ver-13.9,qode-theme-bridge,wpb-js-composer js-comp-ver-5.4.7,vc_responsive

‘Track your ballot like a package’: How technology will smooth the way for November’s mail-in ballot surge 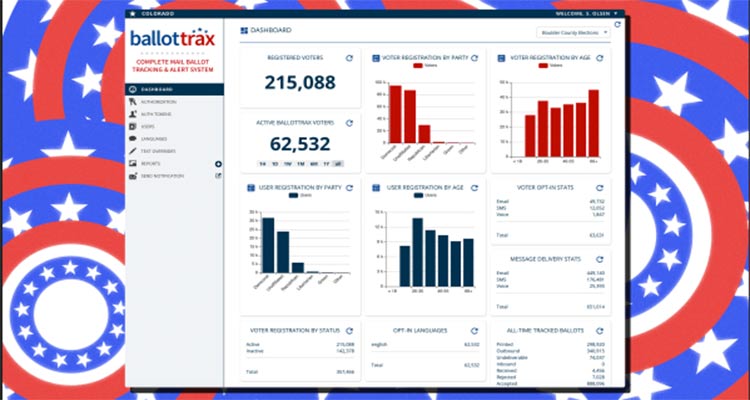 19 Aug ‘Track your ballot like a package’: How technology will smooth the way for November’s mail-in ballot surge

Posted at 16:42h in News by Administrator
Share this:
By Talib Visram9 minute Read

As part of a string of voting laws signed by Virginia Governor Ralph Northam in mid-April, the state became the 34th in the country whose residents may vote by mail without having to prove that they couldn’t vote in person. Of the remaining 16 states that don’t grant that right, governors and election officials in 11 allowed exceptions during the primaries on account of the pandemic—and if the coronavirus is still lingering in November, might be expected to continue those exceptions.

“Whether they want to or not, all states are going to see a dramatic surge in mail voting this year because of the pandemic,” says Wendy Weiser, director of the Democracy Program at the Brennan Center for Justice. “There are a lot of changes we’re going to need to make to be able to have a safe and fair election.”

States that are relatively new to the process of voting by mail will have to scramble to establish infrastructures to accommodate it before November and to quell voters’ fears about mail mishaps—both ensuring people get their ballots and communicating to people that their votes were counted. For that, they’ll need intelligent ballot tracking.

While many jurisdictions have systems whereby citizens who vote by mail can see simply if their vote has been counted, those systems fall short of more rounded, intelligent software, run mostly by two companies called Ballot Scout and BallotTrax, which extend the tracking to the entire journey of the ballot. They provide an essential and inexpensive service, experts and developers say, that ensures security and comfort for both voters and election officials. Amber McReynolds, CEO of the National Vote at Home Institute, is actively recommending the adoption of the tools to states that are transitioning to absentee ballots.

How does a ballot get tracked?

They systems follow a ballot on its round trip, starting right after it is printed. They trace it as it’s processed by the postal service and enters the outbound mail, ready to be shipped to the voter’s residence. Once a voter receives it and sends it back, they can trace it on its return travels, as it reaches the election office, and has been accepted for counting. At each stage, voters can opt to receive real-time messaging, especially crucial for millennials who may not frequently check their real-life mailbox. Messages arrive in the form of text push notifications, emails, or voice alerts, depending on which option they’ve chosen.

“It’s sort of similar to the way you would track an Amazon package, where you can see where the package currently is in a the mail stream,” says Jessenia Eliza, director of government initiatives at Democracy Works, the nonprofit that designed one of the two major ballot tracking softwares currently available, Ballot Scout.

Systems like Ballot Scout essentially serve as bridges between the voter roll data from the state or county, and the USPS’s Intelligent Mail Barcode data, which is specific to election mail. A given barcode is a series of 65 long and short bars that code for information such as the mailer who it’s sent from, the zip-code it’s going to, and the fact that it’s specifically an election ballot, which gives it more urgency. The software systems analyze the complex USPS data and digest it into information that the voter and election officials want to know at each stage. They provide an administrative dashboard for election officials, plus a public-facing lookup tool for voters.

At every stage of the process, the status updates provide comfort for voters. The very first message, that the ballot is on its way, can simply remind voters that there’s an election coming up, and acts as a nudge for them to update their addresses if necessary. Then, if tracking says a ballot was mailed but it was never received, the voter knows to get in touch with the election office. Steve Olsen, the founder of BallotTrax, a for-profit service that is the other major tracking service, and competitor to Ballot Scout, says it can help retrieve missing ballots, such as the time it helped locate a pallet of ballots neglected at a large post office. “We were able to use this system to actually cure that problem, before those voters were disenfranchised,” he says.

Colorado, one of the five states that vote only by mail, institutes a scrupulous signature-matching process when ballots are received, performed by a team of election judges against past voting records. It’s strict, but Colorado is also one of 11 states that allow voters to “cure” ballots, or fix them, instead of letting them go to waste. Once received by the election office, tracking services can alert voters if the signature on the ballot is missing or mismatched. And it can auto-trigger an immediate notification to the voter to get in touch, or email an attachment with precise steps for “curing” the problem.

The final update is when the notification signals to the voter that their vote has been accepted for counting. “It’s helpful to get that reassurance that the elections division has received it, and that it’s accepted for counting,” says Jocelyn Bucaro, Denver’s current director of elections, emphasizing the boost for voter confidence. It’s not just peace of mind for voters, but also informative for election officials. They can also accurately predict how many ballots they’re expecting to receive on a certain day during election season (some states start voting weeks before Election Day), and so can ramp up their volunteer staff and other resources.

Colorado’s Denver County is the only jurisdiction in the country that has its own in-house intelligent tracking system. The election office developed the tool in 2009 in partnership with a software firm called i3logix, before that company marketed it more widely as BallotTrax. Denver decided to continue managing its system, now called Ballot TRACE. McReynolds, the CEO of the National Vote at Home Institute, who’s also the former director of elections in Denver, mentions a significant additional benefit: during her tenure, the tool also showed an increase in voter turnout. Over the course of four years, Denver recorded 3% higher turnout among people who had signed up with Ballot TRACE.

BallotTrax is now sold separately as a “managed software as a service” tool, giving other jurisdictions free rein as to how to handle the software, says Olsen, the company’s president. Among other custom choices, each state or county has complete control over the messaging they want to send to voters, and over what they call their system.

BallotTrax is used in 26 counties in California, where it’s branded as “Where’s My Ballot?,” and several in Colorado, including Boulder, where it’s branded as “Ballot Track.” There, says Mircalla Wozniak, communications specialist for Boulder County’s election division, BallotTrax works closely with the Secretary of State’s office, from which it receives up-to-date voter information. Wozniak says a third of all voters are enrolled in Ballot Track, and that the number grows every year.

Ballot Scout, the rival Democracy Works tool, was put into place in late 2016 after numerous pilots with different jurisdictions that demanded better tools for absentee voting. In Florida, one of the “no-excuse” states, a third of the electorate already votes by mail. Brian Corley, supervisor of elections in Pasco County, north of Tampa, signed his county up for Ballot Scout after a conversation with McReynolds about improving election best practices. “Being the largest battleground state, there’s a perennial spotlight on Florida,” he says. “Everything we do is scrutinized.”He says they “limped through” the March primary without several poll workers. And he says 1,500 volunteers, many of whom are older, have already reached out to him to report that they’re not comfortable to work at polling stations in the fall. For Corley, then, voter confidence is crucial in a year when he estimates voting by mail to double.

That assurance is not only to combat fears of lost mail, but also ones of more duplicitous activity. Oregon, the first mail-vote-only state, has found that voter fraud is next to nonexistent, only reporting a dozen cases of voter fraud since 2000, accounting for 0.0000001% of votes counted in that time. Still, the president has recently used fears of voter fraud to push a false narrative about the prevalence of fraud in mail-in ballots.

The one recent high profile voter fraud incident in recent history took place in North Carolina’s 9th congressional district in 2019, when a Republican operative paid locals to round up blank mail-in ballots in two counties. He collected $84,000 and possibly tampered with the ballots, resulting in a slim win for the Republican candidate that was later overturned. The software developers say the systems not only allay voter fears, but also help prevent this activity, called “ballot harvesting.” “It would be unbelievably difficult for somebody to actually harvest a bunch of those ballots without our system knowing,” Olsen says.

Voters are expected to use their right to vote by mail this year. Even in 2018, pre-pandemic, 79% of Arizonans and 72% of Montanans voted by mail; and in Wisconsin this year, when a primary controversially took place at the peak of virus infections, 71% of voters casted ballots by mail, compared to 10% in 2018. “I predict that every state will have it by November for this year,” says the Brennan Center’s Weiser, “though some will require a major fight. Most are already on their way.”

The services have both received surges in inquiries about tracking: “We’ve probably done more demonstrations online in the past 30 days than we’ve done in two years,” Olsen says. It should be relatively manageable, he says, to set up the service in any of the 34 “no-excuse” states, because the existence of past mail voting records facilitates the onboarding process.

Cost, of course, is a consideration, when the Brennan Center estimates that swing states like Michigan and Pennsylvania would need $90 to $100 million to build entire infrastructures in very little time. But tracking costs are a small drop in the bucket. Ballot Scout comes at a slightly lower price tag, according to McReynolds, because it’s run by a nonprofit; Corley says he pays $4,000 annually for the service. McReynolds adds that Ballot Scout has provided estimates for some of the localities rushing to install services, and has proposed a price of $7,500 for the city of Milwaukee, and $60,000 to $70,000 for Michigan. For an entire state, she says, that’s inexpensive and worth the money.

For Weiser, the value for money is even more reason that tracking should be a priority, because it lets election administrators do their jobs better, and gives the same level of confidence to voters as they’d have in person, seeing their ballots scanned or dropped into a box at a polling place. “It’s a very different animal to run elections that take place by mostly mail ballots,” she says. “Ballot tracking is a piece of that—and it’s a valuable piece.”